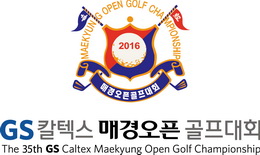 Well off I went again recently to lug myself and another golf pro’s bag around a few acres of grass and sand, for hopefully four days. This time I was on ‘home’ soil, well sort of, Korea is slowly becoming my home, I think…I have been here approximately 20% of my life now and can still only speak approximately 0.000002% of the local language. I’m more of a body language kind of person anyway.

After being informed the previous week that my university would be closed on Thursday and Friday (a day I never work anyway!), I saw this as an opportunity to do something a bit more constructive than spending four days being horizontal, eating pizza and watching whatever the limited amount of English channels here had to offer. I can get fat later in life, for now, being chubby is acceptable!

I dropped an email to the folks at OneAsia Tour to get a glance at the tournament’s entry list and see if I could reel in a golfer for the week. Oh, I suppose I better mention that the tournament in question was the GS Caltex Maekung Open at Namseoul Country Club aka Potential Ski Resort. Just in case you got so excited for this latest post that you forgot to read the title… Locals like to refer to this course as the ‘Korean Augusta’ apparently… not sure why to be honest. It is certainly well known for being a hike and a half, which means I’ll be loving the concrete calves on Monday. Well hopefully on Monday!

After scrolling through the entry list, which was about 95% Koreans (obviously!), the first foreigner I spotted was Aussie Matt Guyatt. Luckily, he has his own website, so I dropped him a message through that and a temporary potential dream partnership was formed. Well I hope so anyway… Here he is behind a tree, awwww yiiiii.

Matt (or probably better known as Matty as the Aussies would say, surely not Matto…) had already booked a twin room at the official hotel, so offered to put me up there for the 5 days. I did warn him that my nose/mouth may become quite active through the night, so Wednesday was a trial night, to test the snoring meter. With the aid of Vick’s VapoRub, I was sure all would be fine, well for me anyway…

As luck would have it, one of the only other golfer/caddy combo’s I knew at the tournament was put in the same group as us for the first two days! So that made three Aussies,(Matty, Brett Gambling and Junseok Kevin Lee) two Koreans (names I can’t remember..and an Irishman (name I can remember!) in the same group. It sounded like the recipe for disaster, but only time would tell…It was all set up to be an interesting opening two days!

I landed in Seoul at about 8pm and grabbed a taxi to the Novotel in Gangnam to catch up with Matty. The Novotel is pretty swanky, but sure if you’re going to continue living the dream, you need to do it in style, occasionally…

We had a bit of a yarn, but not for long as he was zonked after playing 18 in hurricane like conditions earlier and he wanted to watch his favourite show, Home and Away. Yes, HOME AND AWAY, the show that everyone stops watching after the age of about 12…I think he is the first Aussie I have met that watches it…I was just hoping that he was so wrecked, he’d be able to handle the imminent snoring. The VapoRub was laced under the schnoz and he had come prepared too… 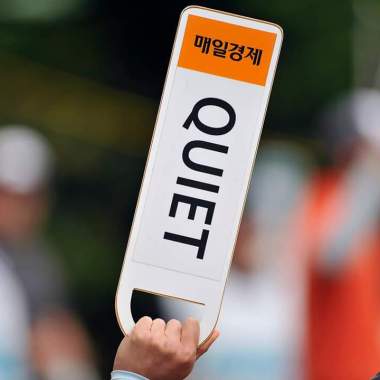 A nice 7am wakeup call after a snore free night, well apart from a few cackles that were released from both parties…and Day One had arrived. 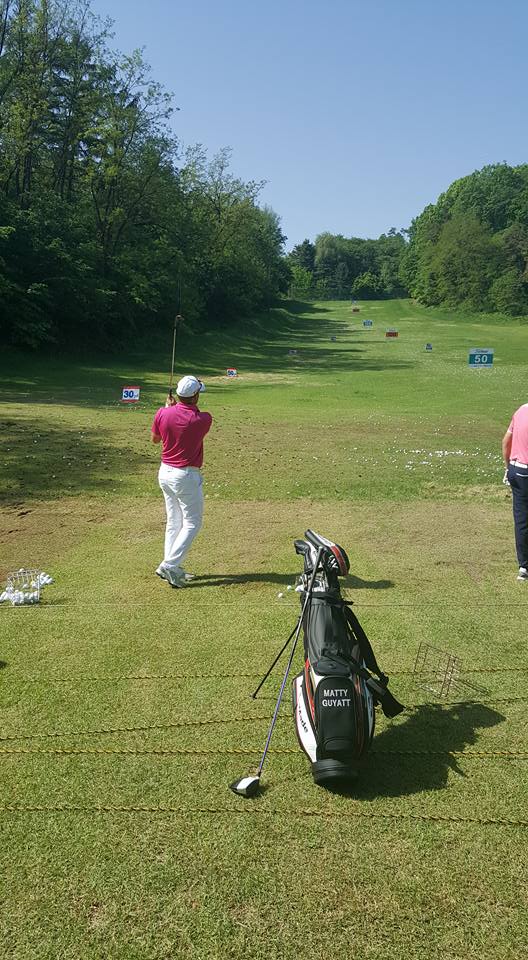 We grabbed the 9am bus to Namseoul CC for our 11:30 tee off, so plenty of time to wander about the place, chatting with various players and media, which wasn’t too constructive as the language barrier took its toll after a few words. My bad in all fairness. Six years here!

This was the first time I’d felt a bit nervous caddying. Maybe because it was on home soil…or I had no idea what Matty was like once he swung the club for the first time and we headed into the grassy gauntlet for a few hours. Luckily, he turned out to be quite the laid back, positive character that I’d hoped for. Although, I am interested to caddy for a hot-headed golfer someday, so I can laugh at them when they lose their chops. I mean seriously, life could be worse right? And getting angry just means bad scores becoming even worse! 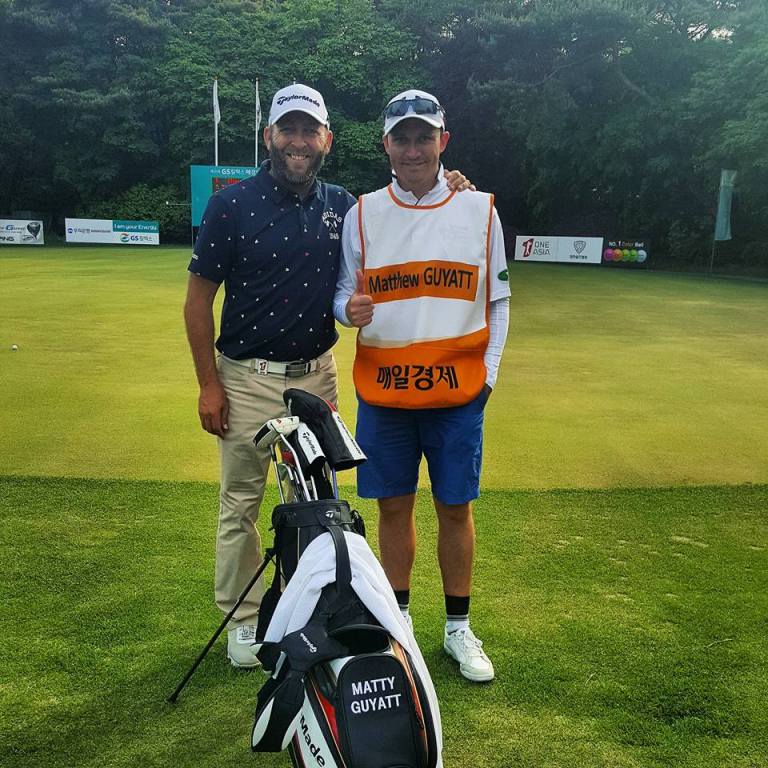 The round itself went pretty well, on a course that has no respect for people’s calves. Matty played some great golf and finished up on -2, after an incredible chip on the last, using the slope on the green to roll the ball, very slowly and delicately to about a foot from the hole. Before the shot he had turned to me and said, ”I don’t know if I can keep this on the green…” The greens at Namseoul were faster than an untested bunch of Russian Olympic sprinters, so tied 9th after Day One was a quality start. Couldn’t have ask for much more really :). I stayed around afterwards for a while to get a few snaps with the local hero’s and to take a look at the ‘notorious’ green jacket and trophy.

Once we got back to the hotel, it was time to load up the bellies. I was starving after not eating all day. What’s that about?? My belly needs to take priority over everything from now on! We caught up with a couple of more Aussies, Michael Sim and Steve Jeffress and wandered down the road for a quick munch. It had been almost 10 years since I shared dinner with just a group of Aussies. The banter was flying between them…but I didn’t say much as my mouth was too busy devouring everything on the table. And I know they probably wouldn’t have understood me anyway, even though it’s them with the strange accents… The Irish accent is nothing but sexiness personified as the world knows already.

We didn’t stay out for too long as the alarms were set for 430am with the forecast predicting a day of light rain. There’s no doubt that Day Two was going to be a tough one, but fingers and toes were crossed for a good score again. For me making the cut was the target and take it from there. Matty probably had other ideas I’m sure…On with the VapoRub and off to sleep.

Another (almost!) snore free night was had…and a full day of light rain on day two turned out to be quite refreshing. 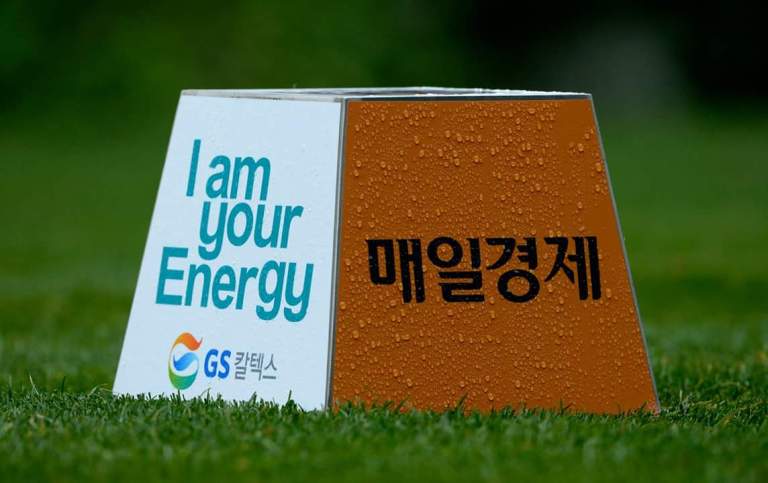 It was nice and cool as I lugged the bag up and down the slopes. Another solid round by Matty saw him move up to -3 score and tied for 8th with 2 rounds to go… could this be the week to shock all the Korean hotshots? Either way that’s another cut made!! Yahoo! Kebabs were devoured after the round and beds were quickly jumped into, as the legs were beginning to feel as stiff as two O/B stakes.

And so came Saturday aka ‘Moving Day’. It didn’t take long to realize that this was going to be a tough one on the greens. The organizers were not too happy with the pin positions on the first two days, as their goal was to see players suffer more than succeed. They decided to put the majority of the pins right at the front of the greens, making it near impossible to aim at as most greens fell sharply towards the fairway. It was certainly a challenge as even 3 foot putts were hit with the hope of not 3 putting. Crazy golf! Here’s a look at the then leaders 2 foot putt on the 18th with some ‘expert’ commentary:

Matty had some bad breaks during the round, including almost losing a ball that had plugged itself so far into a bunker, it took us a few minutes to find it! He eventually finished on +4 for the day and +1 overall, which left him in a tie for 22nd. Still in a great position, as he only lost one shot on the leader who, along with most of the field ended the day over par. Did you watch his putt up there ^^?? A trip to get Burger King takeaway and pig out in the hotel room was agreed upon for the evening, which I would never refuse! Snoring guaranteed after a Whopper with Cheese! 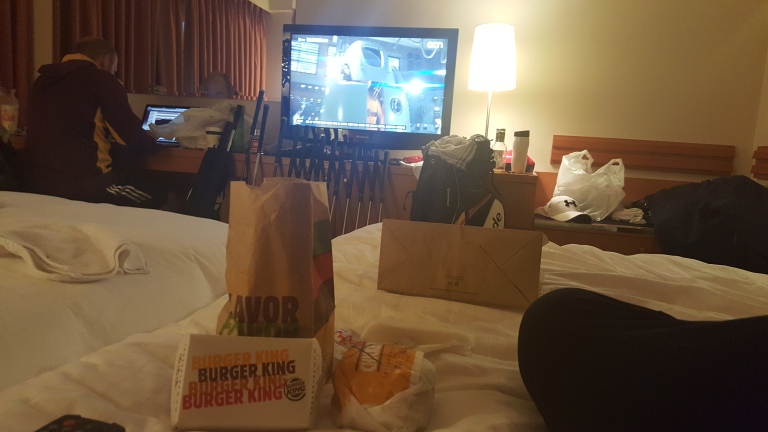 The organizers seemed so pleased with the Saturday struggle that they decided to leave the pins in similar positions for the final day. To be honest, it was quite funny (as it was beyond ridiculous) at times to see professional golfers standing over 3 foot putts trying their best not to turn them into 30 footers! 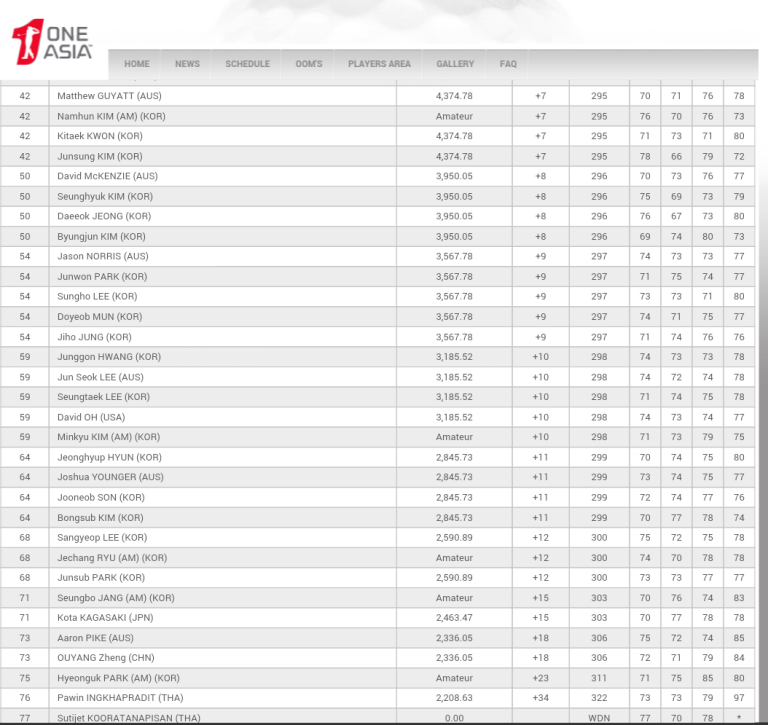 Unfortunately, a stretch of four disastrous holes at the start of the round all but ended any hopes of an incredible week. What was impressive though was that this didn’t faze Matty too much though and he played out the rest of the round under par to finish in 42nd, which wasn’t too bad! He told me that he decided to putt with his eyes closed for the last 10 holes. I’ll be trying that tactic the next time I play, seen as it worked so well for him! He almost sank a monstrous putt in front of the huge crowd on the 18th, to finish in style. It had been an emotional week for him, as his coaches wife had recently passed away and he had written her name on all of his golf balls for motivation. It certainly worked for most of the week.

Matty had to rush off to catch a flight straight after the round, but I’m sure we will cross paths again pretty soon. I headed back onto the course to watch the drama unfold, which is what certainly happened. On the 17th green both Sang-hyun Park and my maaan Zoomin Soomin held massive birdie putts, which resulted in a play-off, after Zoomin missed a 15 footer on 18 to win. I got myself the best seat in the house in front of all the media cameraman right on the 18th green to watch the action. Much more exciting than any episode of Home and Away for sure!

A win for Zoomin would have been great and after he made a an impressive 10 foot putt on the first play-off hole to stay in it, so it was back to the 18th tee again. It was pretty obvious though that he was nervous, while Park looked to be in complete control and more determined to win. I suppose time and experience will certainly help Zoomin with the nerves and he will win multiple times on Tour, without a doubt. Quite possibly at this year’s Irish Open if he keeps these lucky charms on his bag/cap:

Park held his nerve to tap in on the second play-off hole, which led to the traditional soaking and presentation of the winner’s green jacket and that was that!

The Korean Augusta had certainly taken its toll on everyone and it was time to head back to reality of my 9 hour a week university job…until next time!